The ultimate guide to drafting a fantasy football team

by David C. Girard
in Football
0

Over the past few years, fantasy football has grown in popularity exponentially. Millions of people play on ESPN and other websites all over the world. It’s become a huge hobby for many adults and children alike. Many companies will even give out Christmas bonuses to their employees based on how well they do in their league (I’m talking about you Fidelity Investments).

If you are looking to start your first league, be prepared for some work. While fantasy football is a fun and simple game, there is a lot of pre-planning that goes into it. To prepare for your draft, you should spend at least two to three hours preparing. Before I get into some of the nitty-gritty, here are a few quick tips that will help you on your way.

Generally, a league with 10-12 people picks for about two hours. If you have more than 12 people in your league, draft times can double and it will take much longer to pick the team.

If everyone’s picking from an online league, it’s much easier because people can take their pick and go do other things. This makes it much less difficult for the commissioner if they’re hosting the league.

If everyone’s going to be picking from a phone, it’s important that people can’t make picks while driving or operating machinery. If you don’t want this to happen, make sure there is no alcohol involved and that everyone is paying attention to the draft.

Draft day will go a lot smoother if someone can be present for all of your league members during the draft. This person should be able to use IM or email throughout the draft so you can answer questions, answer trade offers, etc. Everyone doesn’t need to know how to use these things, but they should at least know how to access them.

You need to decide on this before you begin drafting players because their draft position will require that pick orders are followed accordingly. It’s not fair to change the order once people have already picked because there’s no telling whether they’ll want to pick again later on.

When you’re drafting players, make sure everyone is ready before you make your selection. This goes for both online and over-the-phone leagues. If one person isn’t paying attention or hasn’t made their pick in a reasonable amount of time, take them out of the draft.

It’s not fair for one person to hold up the entire draft because they haven’t made their pick yet or aren’t ready. This is why it may be good to have someone at your draft who can act as gatekeeper and keep time if necessary.

You should also consider what order you want quarterbacks, running backs, wide receivers, tight ends, kickers and defense to be picked in. 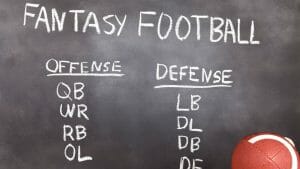 How long does a fantasy football draft take

If it is taking longer, you may need to reevaluate the time you allot for each pick. You don’t want anyone showing up late or having to leave early because of your draft length.

Drafting a fantasy football team can be a bit challenging but if everyone follows these simple guidelines, it should go fairly smoothly and take less time than expected.

You can set up an automated draft if you want to save some time and energy.

This allows for people to make their picks on their own and doesn’t require the commissioner’s involvement.

If you want to pick a fantasy football team, draft strategies may help. They give ideas on what moves work best and which don’t. You can also use some of these strategies with your first few selections and then switch it up later on just to keep people on their toes.

Once you’ve finished the draft, it’s time to play some football and win some games!

If you’re going to be drafting your team from an online league, make sure everyone is available at the same time. You want as little interference as possible with people’s schedules and if they can do it on their own time that would probably work best for them. This way, nobody will have to wait around while others are making decisions about who should go first or second in the draft order. It’ll also help keep things moving along smoothly since all of the picks will happen simultaneously without any lag times between one person picking and another being able to pick again after waiting their turn.

If all goes well, your fantasy football team should be ready by kickoff Sunday night!

KD’s shoe line is the best-selling Nike of 2017