Who is the best wide receiver in the NFL? This is one of the most difficult questions to answer for a league that features many of the greatest athletes at their position. As it stands right now, there are a few options to consider, but two stand out from the rest.

This is one of the most difficult questions to answer for a league that features many of the greatest athletes at their position. As it stands right now, there are a few option to consider, but two stand out from the rest. Antonio Brown and Julio Jones have been far and away the best receivers this season, and both deserve to be considered for the top spot. Vote for your favorite one! Antonio Brown Julio Jones Odell Beckham Jr DeAndre Hopkins A.J Green

It’d be quite easy to list the top 5 of 2016 NFL best wide receivers by number and rank them 1, 2, 3…etc. However, this is a subjective list; we don’t want to make this about personal preference based on how many yards or touchdowns each receiver has scored. We want you to decide which receiver has had the best season in 2016 based on the quality of their catches, their touchdown to reception ratio, how well they’ve performed against other top receivers, the number of targets received per game, and so on.

Each receiver should be considered equally despite what team they play for or who has helped them score all those touchdowns.

What makes a receiver the best in the league? There are a few things to consider when deciding who is going to be at the top of this list, but it mostly boils down to how consistent their performance has been. We’re also considering how well they perform against other top talents at their position and what kind of targets they receive per game.

Why is Julio jones not at the top? He’s number 1 in many lists

Julio Jones has had an incredible season, but he has suffered a few hiccups that has put him behind his competition (namely Brown and Brown). Jones has a touchdown to reception ratio of 4:1, which is good but not as good as the other receivers in the league. He’s also been held to less than 100 yards four times this season, though he hasn’t done worse than 77 yards in any game. 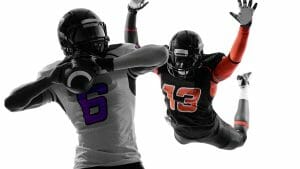 Antonio Brown is currently ranked as the number one receiver in the league by many sports sites like ESPN and Fox Sports.

He has had a phenomenal year this season, especially since he’s had 10 games of 100+ yards.

Brown has also caught touchdown passes in every game except one, though he did miss playing against the Dallas Cowboys due to an injury (he was still able to come back for their second meeting)

How do you determine who is the “best” player at any position and what factors should be considered to make this determination?

The best way to determine the best player at any position is to look at each player’s statistics. The top 5 receivers in 2016 are Antonio Brown, Julio Jones, Odell Beckham Jr., DeAndre Hopkins, and A.J Green. There were some close calls behind those five such as Jordy Nelson and Mike Evans but it all boils down to who has the best stats.

It would be far too time consuming to generate this list based on what players have scored how many touchdowns, but it’s something you could do if you really wanted to. However, the best way to go about doing this is by looking at each player’s statistics and basing your rankings off of that. That’ll ensure that your list is as accurate as possible, and you won’t have to worry about your opinion conflicting with others.