The life and career of NFL legend Jim Brown

Jim Brown played for the Cleveland Browns between 1957 and 1965 – during this time, he established himself as one of the greatest running backs of all time.

Jim Brown changed the way that fullbacks and running backs played in the NFL. He set records that no one thought were possible, and he paved the way for the type of football we know today. It is nearly impossible to exaggerate the impact that Brown had on the NFL.

We can see his style in the running backs that play today – particularly Clyde Edwards-Helaire, who plays for the Kansas City Chiefs. Do you think Edwards-Helaire will score a rushing touchdown in the Conference final – bet on that and other Super Bowl prop bets here with Fanduel.com.

Brown had an impressive college career that was unlike others who have ended up playing in the NFL.

He attended Syracuse University and played on their football team. He was their second-leading rusher and was nominated for the Heisman Trophy. He set and holds two school records – highest season rush average (6.2) and most rushing touchdowns in a single game (6).

What many people don’t know about Jim Brown is that he also played college basketball and broke school records in that sport as well.

Brown was picked by the Cleveland Browns in the first round of the 1957 Draft. He was the 6th pick overall that year.

Brown had a record-breaking career and dominated the field whenever he stepped on it.

He was invited to the Pro Bowl every single season that he played, he led in rushing yards in all but one season, and he led in rushing touchdowns in 5 different seasons. He was named Rookie of the Year in 1957 and NFL MVP on three separate occasions. He was also an NFL champion (the Super Bowl hadn’t started at that point). 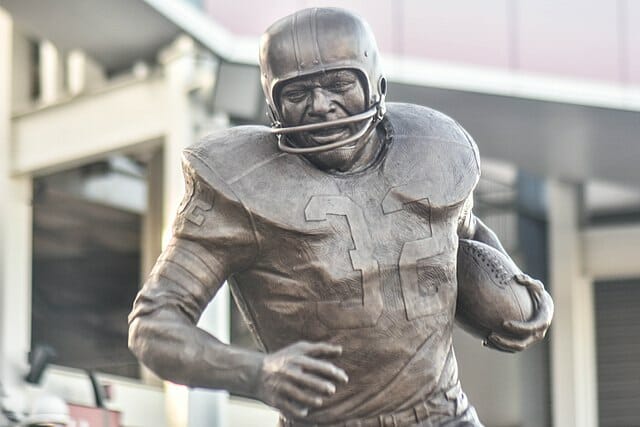 In the 1964 season, Brown led the Browns to the NFL championship final – where they played the Colts in front of 80,000 people. This was the only time he won the title.

When Brown retired, he held the records for most rushing yards. Brown rushed for a total of 12,312 yards. That title is now held by Emmit Smith, and Brown is 11th on the list.

Brown returned to the NFL at the age of 48 when everyone thought that Franco Harris was going to be the first person to break Brown’s record. Harris retired before he beat it.

Brown was a prolific actor outside of the NFL – he acted in 52 movies throughout his career. Brown is credited by many film critics as the “first black action star” thanks to his roles as soldiers in some of his early films.

Brown served in the American Reserves Army and was honourably discharged as a Captain. 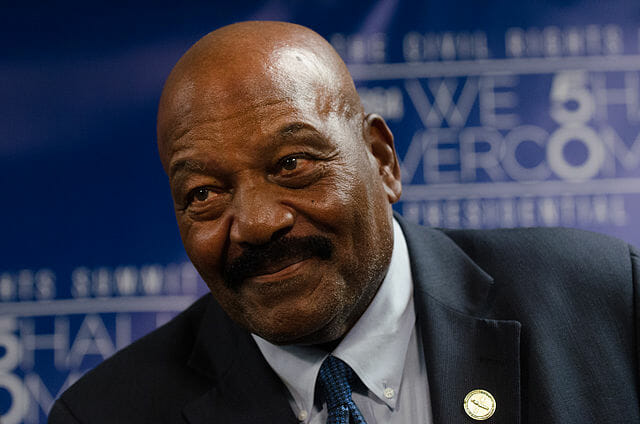 Brown has written several books and had a short career as a commentator for the UFC. He still acts as an executive advisor for the Cleveland Browns.