Bay to Breakers, a race that takes place every year on the third Sunday of May. It’s one of the most popular footraces in the country and has been going since 1912. This article will discuss what Bay to Breakers is, how it got started when it was first held, where it takes place now (or used to take place), who typically runs it or can participate in other ways such as volunteering or watching/betting on people

What is ”Bay to Breakers”

The Bay to Breakers race is a fun event for kids, adults, families, and friends to participate in. The San Francisco Giants are the title sponsors of the race. The goal is to have fun and be competitive at the same time. People can run it by themselves or with groups. It starts at 8 am on Sunday morning at Howard Street and goes through Golden Gate Park to Ocean Beach. There are many charity runners that take part in the race each year. The route has been lengthened due to safety concerns, but it has remained a 7-mile course that takes approximately two hours to complete. 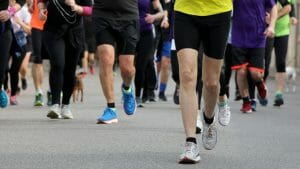 How did it start

The Bay to Breakers was started in 1912 by a bunch of runners who wanted to add some spice and excitement to the event. The idea was that they would run from the bay, which is in downtown San Francisco and finish at The Golden Gate Park which is located in the city’s western part.

This course originally spanned 12 miles and was designed so that it took about two hours for people to complete.

Bay to Breakers has been going on for more than 100 years. It has changed over time but it still celebrates the same things: running, fitness, sportsmanship, and fun.

When does it start this year

The initial course started at the Ferry Building along with Market Street to Golden Gate Avenue before turning onto Divisadero Street In 1968, the start was moved from Market Street to Howard Street and the ascension to Divisadero moved to Hayes Street In 1983, the course was shortened from 7.51 miles to an official 12K (7.46 miles). The current course turns west along Hayes Street and up Hayes Street Hill near Alamo Street. This is the only major incline in the race. After the hill, the race runs along with the panhandle and then west through Golden Gate Park, past the Conservatory of Flowers, all the way to the Great Highway and Ocean Beach. The Great Highway will also host a Finish Line Festival, a postrace recovery and reunion area.

Around 30,000 people participate annually with around half of them being dressed up in costumes while some are just there for fun or to raise money for charity. The largest costume group is the Red Runners who dress up in red costumes and run as a team. This race has a history of being a popular event because it includes a 3-mile scenic walk before the start, which people can use to get in their last bit of exercise before the main event. There’s also a 5K that takes off from Hayes Valley and ends at Fisherman’s Wharf where you can enjoy food, beer, and other postrace amenities

Being popular as it is, it draws participants from the entire globe, every year. With more people participating, the popularity of the race grows even more, as well as charities and sponsorships. This year’s race will be very exciting because over 1k participants more will be engaged than last year. With that being said, put on your running shoes and smile, because ”The Bay” is waiting for you!