On November 22nd, 1950, only 4 years after the first official game,the NBA witnessed the lowest points scored in a game where the Fort Wayne Pistons played the Minneapolis Lakers. This tight end game, itself, with a total of 37 points scored between the two teams in Minneapolis stands alone as the tiniest total the league has ever seen by a wide margin, surpassing the 83 points the Washington Capitals and Detroit Falcons scored on Nov. 2, 1946, in Detroit, a 50-33 victory for Washington.

What is the lowest-scoring NBA game

In late November 1950, with a score of 19-18, the Fort Wayne Pistons took the win away from the Minneapolis Lakers to become the better team in the lowest-scoring game in the history of the NBA.

NBA’s defending champion in the year 1950

Minneapolis was the league’s defending champion, and Fort Wayne head coach Murray Mendenhall didn’t feel he had the personnel to deal with George Mikan and the rest of the Lakers loaded lineup. So, he devised a plan, and the opposition, spectators, and NBA at large didn’t appreciate it too much.

Mendenhall’s plan to overcome the Lakers

Mendenhall instructed his players to hold the ball with the idea that if the Lakers didn’t touch the rock, they couldn’t score. For much of the first half, the Pistons played keep away and drained clock. Minneapolis and its fans were dumbfounded as the team even tried fouling to get the ball back. Halfway through the game, the Lakers held a slim 13-11 advantage, with Mikan responsible for 12 of the 13.

The Pistons didn’t stop in the second half, and seemingly left with no other choice, the Lakers stooped to their level. Minneapolis began holding the ball for minutes at a time, too, and the sides combined for 13 second-half points between them. Mikan ended the contest with a game-high 15 points as his team fell after a failed buzzer-beater attempt kept the Lakers at bay by one point. 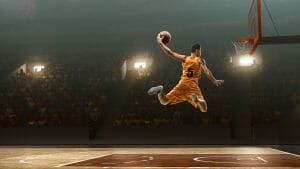 George Lawrence Mikan Jr. (June 18, 1924 – June 1, 2005), nicknamed “Mr. Basketball”, was an American professional basketball player for the Chicago American Gears of the National Basketball League (NBL) and the Minneapolis Lakers of the NBL, the Basketball Association of America (BAA) and the National Basketball Association (NBA). Invariably playing with thick, round spectacles, the 6 ft 10 in (2.08 m), 245 lb (111 kg) Mikan is seen as one of the greatest basketball players of all time, as well as one of the pioneers of professional basketball, redefining it as a game of so-called big men with his prolific rebounding, shot-blocking, and his talent to shoot over smaller defenders with his ambidextrous hook shot, the result of the eponymous Mikan Drill.

He was also known for his unique physical abilities, such as the fact that he had an unbelievable vertical jump that measured 50 inches. This type of vertical leap is rarely witnessed in today’s NBA draft combine sessions.

The aftermath of Mendenhall’s strategy

The bottom line was that Mendenhall’s strategy had worked, and although the shot clock wouldn’t be implemented for about four years later, in 1954, this game was the beginning of the end of untimed possessions in the NBA. The uproar in the aftermath made it clear to Maurice Podoloff, the first NBA commissioner, serving from 1949-1963, that something had to be done to ensure nothing like this could happen again.

The game played on November 22nd,1950, between the Fort Wayne Pistons and the Minneapolis Lakers will forever remain an indicator of the huge difference from today’s games where each team can average up to 120 points per game. This represents the result of the development of basketball as a game and its ”exponents”, the players, in a period of over half a century.